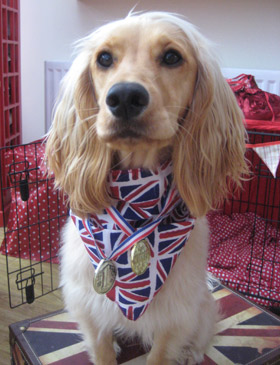 A commanding performance from cocker spaniel Ellie who won a Gold Medal for the UK at London 2012 Olympic Games.

Fortunately the success of multi-eventist Ellie was never in question as she has dominated all competitions this year including a clear win at the Tour de France and bringing home the winner’s trophy at this year’s Wimbledon Tennis Championships.

1 year old Ellie is now in training for the Ryder Cup.  Whilst Stateside she will also enter talks with major league baseball teams about late entry into the upcoming World Series scheduled for October.

An extremely talented and dedicated pup, not only did Ellie deliver Britain’s first Gold Medal but she also put in a fabulous performance at the Olympics closing ceremony and can be credited for her significant contribution to the choreography.