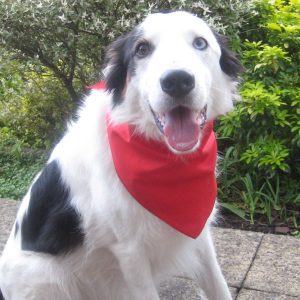 My nephew (?) Simon is on holiday at Grandma and Grandad’s for 10 days whilst his Dad jets off to Portugal.
The best thing about being with the Grandfolks is they don’t go to work. The reason is they don’t get up early enough. This means they’re on hand to throw the ball for him all day, everyday….once they’ve got up!
Although it’s fabulous having company and having someone to throw the ball for him Simon finds them absolutely exhausting. You see the other thing about Grandma and Grandad is that they just don’t shut up.  They’re always talking to him and it’s impossible to rest – he often has to take himself off upstairs for some peace and quiet.  When his Dad gets back from Portugal Simon is going home for a holiday!
And of course whilst he’s staying at Grandma and Grandad’s there’s the constant reminder that he’s not ‘top dog’.  He has competition.  ‘The beige thing’ as his Dad calls her.  His cousin Ellie is the Grand Dog of choice and is understandably favoured by all. Although Simon is smart, loving, obedient and excellent at ball games he does have death breath and rather odd eyes (one is blue and the other is brown)

His Dad calls Ellie ‘the beige thing’ but everyone can see that Ellie is actually the golden girl.  She has sweet spaniel breath and adorable rich brown eyes, that unlike Simon’s, actually match each other.

Despite his flaws he really is a lovely boy and he certainly gives ‘the beige thing’ a run for her money in the Grand Dog stakes.