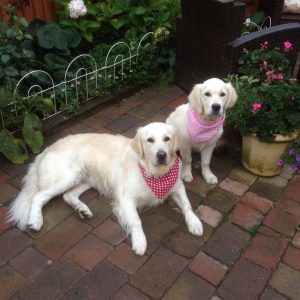 Tia is setting a good example for her new baby sister named Daisy.  Daisy is just 5 months old and wears a baby pink polka dot dog bandana.  Try saying that after you’ve had a few drinkies! Tia is wearing her Red Spotty Hanky.

If Daisy had any early ideas about rebelling and refusing to wear a dog scarf they were soon cast aside when she saw Tia in her bandana, behaving well and looking so lovely.

It must be very nice to have a sister.  I don’t have one myself.  I have a big Brother (!)

I have reason to believe that ‘big Brother’ reads the Puppy Bandana Blog and is watching over me like ‘Big Brother’.  Nosey Parker!  He gets the nosey gene from Mother.

So Tia and Daisy are now famous.  There’s lots of famous sisters out there.  Joan & Jackie Collins, Kylie and Dannii, Venus and Serena, The Cheeky Girls, The Nolans, Scissor Sisters.

They may be famous but they’re not in the Puppy Bandana Photo Gallery so that makes them ‘B List’ to Tia and Daisy’s ‘A List’ sister status.  Thanks for wearing and sharing ladies.

Just one question –  Why is Daisy named Daisy and not Maria? I’m not sure I could’ve resisted it personally.