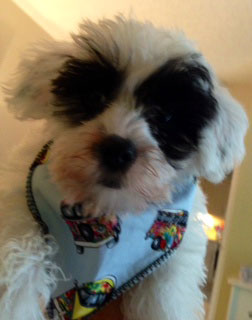 I was watching BBC Breakfast in bed this morning with a cup of tea and a cuddly cocker spaniel when they covered a story about Atlanta Zoo’s 100-day-old-twin giant panda cubs.  Apparently they have now been named. The names are – Mei Lun (may loon) and Mei Huan (may hwaan) which comes from a Chinese idiom meaning “something indescribably beautiful and magnificent”.

“How lovely”, I thought.  I probably even said it out loud.

What I was really thinking was “that’s nothing….we have a panda of our own and he’s called Buddy”

Puppy Bandana has a giant panda bear named Buddy.  He’s not giant at all at the moment because he’s only 10 weeks old. And strictly speaking he’s not a panda bear, he’s a Jackadoodle, so I also have to question if he’s ever going to be giant – probably not!

Also, just to clarify, when I say Puppy Bandana has Buddy what I really mean is we’ve borrowed him from one of our customers and put him in our Puppy Bandana Photo Gallery.

It may seem like this blog post is starting to fall apart…our giant panda bear that isn’t a panda bear at all and isn’t actually ours?

Fortunately Buddy is very very cute and very very convincing as a panda bear so for those naughty people who only look at the pictures and don’t thoroughly read the Puppy Bandana Blog, we may just get away with it!

Finally, The Puppy Bandana Photo Gallery is not a Zoo however it is open to the public and there’s lots of animals to see.   Actually there’s just lots of dogs, a fair few reindeer from Christmas 2012 and of course one giant panda named Buddy.

Thanks for wearing and sharing Buddy