How does the man in your life feel about dog fashion?  Are dog bandanas permitted?  Well if he’s never worn one then he clearly doesn’t know what he’s missing!  I was of course referring to the male dog in your life and not the male human.

The male human is either fashionable or he wears whatever is close to hand, whatever he’s told to wear or whatever he had on yesterday! One sure sign of his fashion sense is the ‘socks n sandals’ thing. If he’s ever pulled a stunt like this then you are well within your rights to completely override any opinions he has about the dog’s wardrobe.   If your man is interested in fashion he’ll be well onboard with the concept of dog bandanas and if he’s not interested in his own fashion why should he get a say in the dog’s clobber? 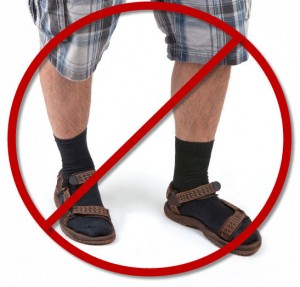 At Puppy Bandana we realise that compromise is sometimes necessary and we decided we may need to lend you a helping hand and go with implementation of the dog bandana via the ‘gently, gently’ route.  So we specifically included some boy friendly designs to make your job as stylist / negotiator easier.  You can sneak the cute florals in later once he’s processed things and adjusted to the dog bandana way of life.  In time, you may even hear him telling dog bandana admirers that the bandana was his idea and boasting about the different designs ‘dog’ has in his wardrobe.

Boy friendly designs include the ever popular and always in fashion Union Jack, Flamin’ Hot (my personal boy dog favourite!), Skull and Crossbones, Camouflage for the military mad and Traffic Jam for all the petrol heads, Campervans for Retro dogs, Trucks and Diggers for the builders and construction workers….the list goes on!

We’ve finally managed to introduce a sports themed dog bandana.  Sport…..*wrinkles up nose in distaste*.  Even saying the word ‘football’ leaves a nasty taste in my mouth however we’re back to the word ‘compromise’ so there’s now a sporty dog bandana called ‘Spot The Ball’ in our shop.

Buy the man in your life a dog bandana.  Puppy Bandana have opened a Men’s Department especially for you.  It’s like a Gentlemen’s Outfitters for dogs!