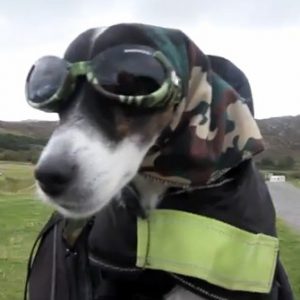 OMG! This is amazing! Dougal is riding at 50 mph on the back of a motorbike.  He’s wearing ‘Doggles’ to protect his eyes and a ‘Puppy Bandana’ to protect his ears.  It’s got to be seen to be believed and trust me, it’s a really good watch! I now feel inspired to make a video of our dog but the only thing I’d end up showcasing is her show-off poor behaviour.  She only does it when the camera comes out – the rest of the time she’s an angel (honest!)

Anyway, please go to YouTube and take a look at Dougal’s very cool video and listen carefully for the Puppy Bandana mention.  I’ve watched this several times now as you can imagine and it’s still making me beam!

This video has made us think of all of the opportunities open to Puppy Bandana that we’ve perhaps overlooked…UNTIL NOW!

Idea Number 1: Maybe I need to take the Puppy Bandana brand to Hollywood?  Imagine Puppy Bandana on the big screen.  I wonder if there’s a re-make of any of the Lassie films in the planning?  Lassie could wear a quirky fun fashion dog bandana from Puppy Bandana.  We’d sell millions of bandanas if Lassie endorsed the brand.  Opening night at the cinema with Lassie on the red carpet in a beautiful bandana with the paparazzi snapping away.  Marvellous idea!

The other sales avenue is not quite so glamorous and possibly a little more niche….in fact it’s potential audience is just Dougal really.  Here it is.

Idea Number 2: Safety wear for Biker Dogs to protect the ears! I can hear you saying ‘this was Dougal’s idea’.  I’d better apply for a patent very quickly before Dougal rumbles me!

If I’m successful and the idea takes off I’ll need to shoot my own video because Dougal will be cross because I’ve ripped off his idea.  I’m shuddering at the thought of taking a video of the spaniel on a motorbike with her ears contained in a bandana.  It’s got ‘PROBLEM’ written all over it.  It’d have to be a large size bandana to fit the massive ears in.  She’d misbehave terribly.  And of course we don’t currently own a push bike let alone a motorbike.