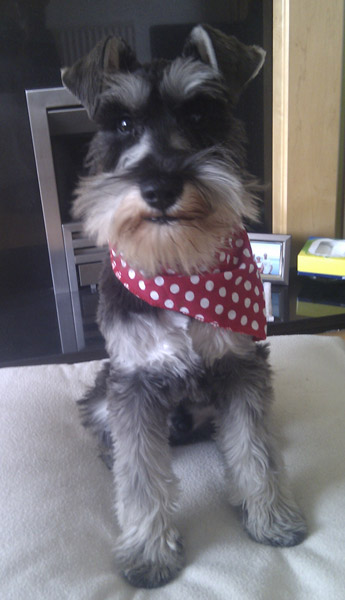 I really can’t help it, I can’t explain it and I don’t think there’s anything I can do to stop it but every time I look at Dexter’s photo I think of The Muppet Show!  Just to clarify, I really love The Muppets and I’m totally in love with the way Dexter looks so this is in fact a compliment!

Dexter looks like he’s brimming with character and though I don’t know him personally I think he looks like a right cheeky chappy! I’d be like putty in his hands (or should I say paws?)

The other thing I love about Dexter is the name Dexter.  What a super-cool name!  If I’d had a boy (dog) I’d have named him Dexter.  As well as The Muppet Show I’m also a fan of the American TV Drama ‘Dexter’.  Dexter is America’s favourite Serial Killer and he’s my favourite too!  If you’ve never watched Dexter and you like that kinda thing then you should definitely check it out.

Anyway, I’m sure this Dexter is not a serial killer and he’s not a Muppet either but he is featured in our Puppy Bandana Photo Gallery.

By the way, Dexter is wearing our best selling bandana, Red Spotty Hanky.

Get your Red Spotty Hanky HERE from just £2.99