Dexter – The wait is over!

Dexter could barely sleep with all the excitement!  From the moment he received the dispatch email from Puppy Bandana telling him that his bandana had been posted he kept racing to the front door and peering up at the letterbox.  Only when it was explained to him that the Postman wouldn’t bring his bandana until the next morning did he realise that he was going to have to be patient and wait.

Dexter is only a puppy so he’s still learning stuff all the time and he’s had to add learning to be patient to the list of things he has to master.

The wait is over!  Never has anyone been so pleased to see the Postman.  Dexter threw himself on the postman, sniffed out the bandana and wasted no time at all in popping it on.  To say Dexter is pleased with his new clobber would be an understatement!  He’s going to wear it all the time and he’s already pestering about Christmas bandanas. 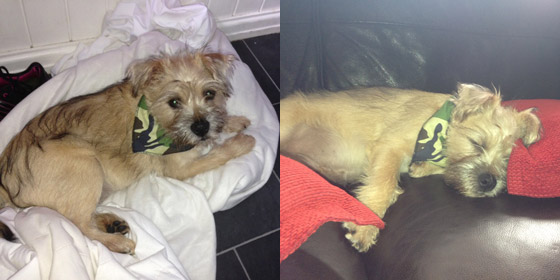 Dexter now has to practice being patient and waiting.  He’s first challenge is to be patient and wait for puppy training next week where he will look ‘too cool for school’ in his camo bandana.  And of course he has to wait not only for the arrival of his Christmas bandana but also for Father Christmas to deliver it – be patient Dexter, it’s only another 48 sleeps!

Here’s Dexter in his Camo Dog Bandana and he can also be seen in our Puppy Bandana Photo Gallery.  Dexter is absolutely exhausted from all of the excitement.  He insisted on keeping his bandana on for his nap.

Looking good Dexter – thanks for wearing and sharing.