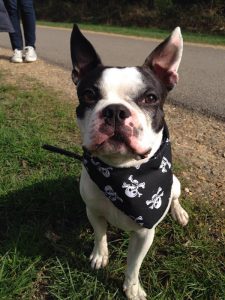 Dexter has been out pillaging in his Skull and Crossbones Dog Bandana.  He wasn’t terribly good at it because everybody recognised him so they were not in the least bit worried.

See Dexter in one of his many many outfits, including Skull and Crossbones in the Puppy Bandana Photo Gallery and in Dexter’s dedicated photo album, Dexter-World.