Dexter is Cool for Cats 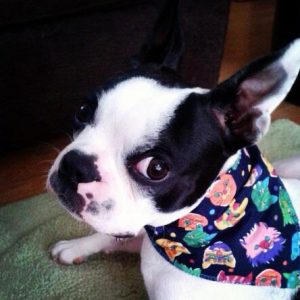 I think I may have a bit of a crush on Boston Terriers.  Last time this happened it was Spaniels and I think you can guess how that turned out!

The ‘Boston Terrier Phase’  is quite a recent thing.   I met my first Boston Terrier in Homesense a couple of months ago.  It was a little girl called Poppy and she was a baby and was being carried around by her Mummy who was accompanied by her Grandad (Poppy’s Grandad, not her Mummy’s Grandad…which would be Poppy’s Great Great Grandad…..Nevermind!) Anyway, Hubby wasn’t with me so I was able to talk to them and to meet Poppy without him cringing with embarrassment and then teasing me for talking to strangers.  She was absolutely lovely and so were her people.

My next encounter with a Boston Terrier was at a car boot sale.  Hubby wasn’t with me (he wouldn’t be seen dead at a car boot sale because he suffers from a mild form of snob syndrome)  Without the ‘ Hubby handicap’ I was able to chat to everyone and meet their dogs  :-D.  And here I met my second Boston Terrier. I hope she’ll forgive me but I can’t remember her name.  I do remember that she had masking tape on her ears to stop them folding over in the wind!

I’ve not met Mr Jeffers in person but he is in our gallery and on the blog and that makes him almost family doesn’t it?  He’s a Boston Terrier.

And now I have the pleasure of meeting Dexter….in the virtual world at least.  Thank you Dexter for sending in your photos.  I think you look wonderful in your bandanas and it’s an absolute pleasure to add you to our gallery.  You look so good I’m going to use your photos in our bandana shop too so other little dogs can see how the bandanas look when worn by someone super-cool!  Dexter is helping out with Cool for Cats and also Trick or Treat.

I want a Boston Terrier.  There….I’ve said it!  I wonder if Hubby will see this and surprise me with a puppy?  If he’s reading I should perhaps mention that I’d also quite like a Boxer and a Miniature Schnauzer…