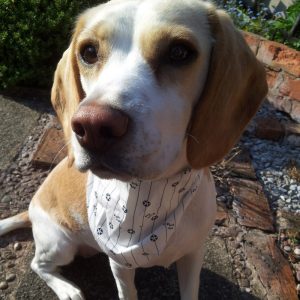 This little dog has got a lot to answer for! You see, I really like the name Lola but I hate what it does to me.

It all began a few days ago when a certain little dog emailed some photos of herself to me at Puppy Bandana.  Her name was Lola.  She was a Showgirl.  Well, I couldn’t seem to get her off my mind.  To be fair it’s understandable because she sent in a number of pictures of herself in various bandanas and even one with feathers in her hair and a dress cut down to there…

And that’s where it all started to go wrong…yes, I’ve been daydreaming in the post office and it was only when I got a few stares from people that I realised I’d been singing Barry Manilow OUT LOUD whilst in the queue!  The shame of it!   I wouldn’t mind but I don’t even know all the words!  How embarrassing!

Anyway, I’ve decided that I must do something about it because this simply can’t happen again.   I’ve researched the lyrics and by publishing them here I’m hoping to infect others and cure myself. Worst case is that I still find myself singing the blasted ‘Lola anthem’ but at least I’ll be getting the words right.

It’s a three pronged attack.  A combination of the photos of Lola the Showgirl in her bandanas, the mere mentioned of Barry Manilow and his super famous, super catchy Copacabana Post Office karaoke number and of course the fact that I’ve given you the correct lyrics below will all help you along with your new career as a Manilow impersonator.

Off you go now and take a look at Lola the Showgirl in her bandanas in our Puppy Bandana Gallery and then you can return here to pick up your lyrics.

Here’s the lyrics (or you can make up your own)

Her name was Lola, she was a showgirl
With yellow feathers in her hair and a dress cut down to there
She would meringue and do the cha-cha
And while she tried to be a star, Tony always tended bar
Across a crowded floor, they worked from 8 till 4
They were young and they had each other
Who could ask for more?