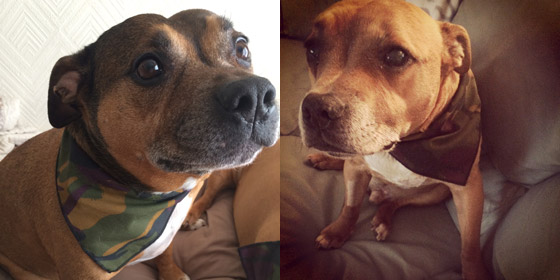 We have two new recruits in the Puppy Bandana Photo Gallery today, Buster and Tyson.  They may look like tough army types in their Camouflage Action Dog Bandanas and they have pretty blokey names too.

we’ve been reliably informed (by Mummy) that at least one of these boys (and we won’t embarrass the poor boy by telling you which one)  is a sweet little baby and loves to be cuddled.   Don’t worry Buster, your secret is safe with us! Oops!  Buster has been busted!

Thanks for wearing and sharing Guys – you look fabulous (and cuddly!)