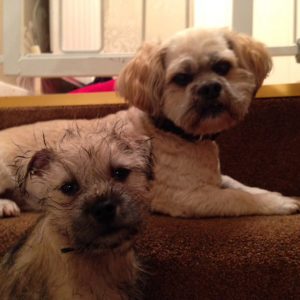 Dexter is trying very hard to be patient but it’s just so exciting!

He’s received an email from Puppy Bandana to say his Camouflage Dog Bandana has been dispatched and he’s absolutely thrilled.  If it arrives in time he’s going to wear it to Puppy Training next week.  How cool!  He’s really looking forward to showing off to his friends.

Anyway, here’s a picture of Dexter waiting for his bandana and pretending to be calm and patient. It’s a very deceptive photo.

Poor Dexter probably won’t get a wink of sleep tonight and neither will anyone else!