Meet Albere!  Albere sounds all Italian (perhaps it is?!) but actually Albere is Welsh, which is still quite exotic really!

Albere is a 4 year old Standard Poodle, he’s wearing his Welsh Flags bandana with pride and he’s been attracting a lot of attention with his handsome good looks.

We don’t feel there’s anything ‘Standard’ about Albere, he looks top of the range to us 🙂

Looking good Albere!  Thanks for sharing your photos with us.

We’ve added Albere to our Puppy Bandana Photo Gallery and he’s also helping out in the shop with one of our other, equally handsome and photogenic Welsh customers, Woody.  Woody is very grateful for the company as he’s had no-one to talk to since he began working in the shop because Ellie, our Spaniel, who is also helping out, doesn’t speak Welsh.   Woody and Albere will be nattering away in Welsh adding a real sense of authenticity to our Welsh Flags Dog Bandana Page!  Gosh I’m so pleased to have met you guys! 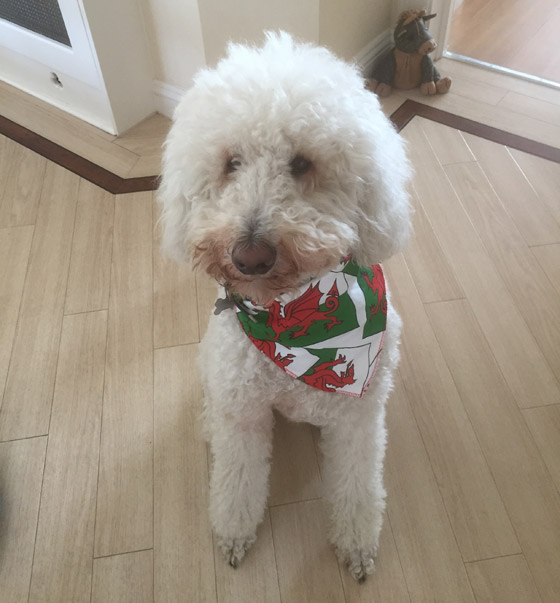