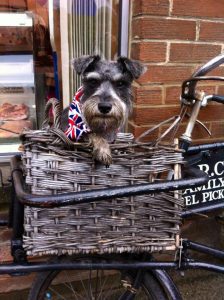 Ava enjoyed the Pickering Wartime & 1940’s Weekend.  She looks very vintage and authentic in her Union Jack Bandana sitting in a basket on the front of a bicycle.  I’m sure all the people at the weekend event were convinced that she was getting into the spirit of things and looking all wartime.

Only Ava and Puppy Bandana know the truth.  This is actually about E.T. isn’t it Ava?

Ava respects the war heroes and everything but E.T. was such a great movie!

Like us, Ava is a massive E.T. fan.  So when Ava saw the bicycle and the basket she realised there was an opportunity for a reenactment!

It’s possibly not what the wartime weekend people were hoping for but to be fair we can still call it a historical reenactment because the E.T. movie was released back in 1982…which was ages ago.